Talk At BOKU. Bows Of Gratitude.

In Vienna, I spoke at BOKU college today, to an overflowing house of several hundred young environmentalists crammed into an auditorium, and also the aisles and beyond. :) The title of my talk was "Being the Change, Changes the Being". 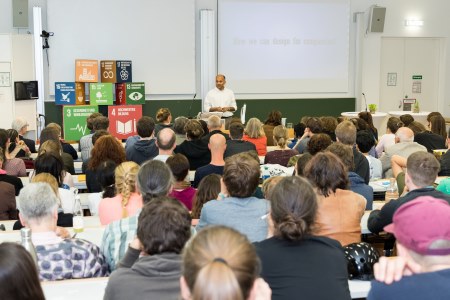 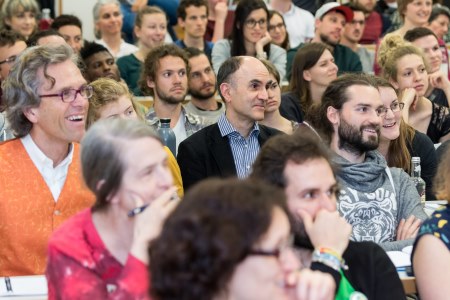 By the end, the field in the room turned electric. It was almost as if all our heart beats were synchronized, and perhaps some of our breaths, too. Boundaries between all of us felt rather blurry. The organizers later told me it was the first time that they had seen a standing ovation in any of their programs. I had to actually interrupt their applause, just so we could get to Q&A.

One never knows what actually triggers such a field, but everyone, myself included, could feel the love. 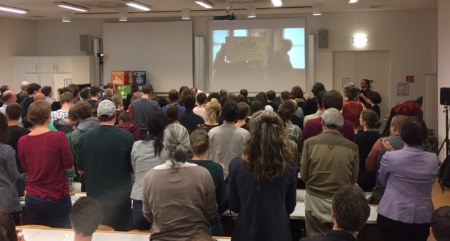 At the end, I got to pick a raffle winner for a really cool bike -- and, without skipping a beat, he said (in German :)) that he would pay it forward! Bunch of them followed-up with a 21-day challenge, and many other ripples are in motion.

One young woman shared a particularly remarkable story. When we happened to be talking after the talk, her ex-boyfriend also happened to be in the impromptu circle that had emerged. They had a bitter breakup just a couple weeks ago; he was cheating on her, and the woman he was now seeing also ended up in the circle. Oblivious to all of this, my topic of conversation was the usual -- selfless love. And it was in the air.

This girl later told me, "I'm really a jealous type of person. I couldn't stand my ex or his new girlfriend, but I knew then what my act of kindness for the night would be. It would be an act for myself. I went up to his new girlfriend and had a casual conversation, and just wished her well. [Pause] It was a big moment for me. Perhaps a mini turning point for my consciousness."

May we all continue to be at the edge of our consciousness, in service to the greater good.