'Creating The Future' In London

Today, I spoke to 500 investment bankers -- an event put on by Weatherbys bank, and curated by our friend Mike Dickson. In the audience was also our good-humored buddy, Marc Winn from Guernsey Island. When I visited Guernsey last, Marc SMS'd a one-liner to Mike: "You need to have ice-cream with Nipun tonight in London." (We were indeed having an ice cream circle that day. :)) Let's just say that it's been a sweet connection ever since.

I might've been the only one not in a suit, but I think Silicon Valley people are excused? :) I spoke about Technology, Values and Ethics. In particular, about "ratio, relationships and resilience". As technology increasingly becomes a black box, can we retain the ratio of tech innovation with inner growth? Can we ensure that our relationships don't contract into echo chambers? Can we build systems that are resilient?

The response was wonderful, particularly since ServiceSpace is actually doing something about it. At a cursory glance, ServiceSpace doesn't seem like a technology company -- but were it not for our 18 million lines of codes, we simply couldn't organize so many people without any overhead. However, we don't lead with technology since, as I said in the talk, we are shifting "Invention is the mother of necessity" to "Necessity is the mother of invention." :)

As we got in the coffee line, the woman in front of me poured coffee for myself and another friend, and the person after me decided to do the same for the rest of the line. :) 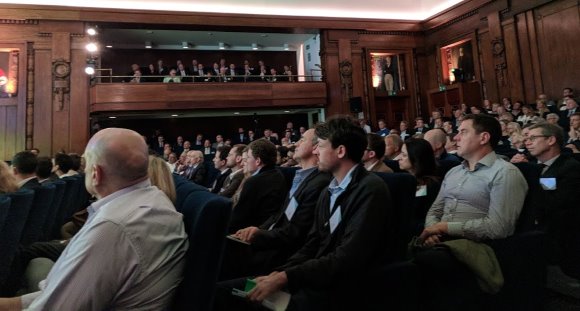 One of the folks who came up to me was Pierre, who is the owner of Huntsman. (The night before, we had dinner at Huntsman, and like in the Colin Firth movie, I kept wondering if any of the knobs were going to open up to a closet full of goodies. :)) He wanted to connect me to some folks, and then spoke about some of his CSR work. I then said, "Why don't you decentralize it a bit more? Just imagine empowering one of your employees to find one unsuspecting customer every month and gift their suit to them! It would totally make their day, and they would probably tell the story for a long time to come." He loved the idea, so let's see. :)