"I've just experienced a big earthquake. And I'm blaming all this on Ashima," Lila joked, but not really.

While living in Bucharest and hosting weekly Awakin Circles, Ashima once sat on a flight next to a stranger who told her to visit a school named Veritas. She visited, fell in love with their explicit mission of kindness, and their emphasis on social-emotional learning. Pretty soon, they were hosting Karma Kitchen in school, Smile Cards were translated to Romanian, 21-day challenges were used by teachers, and many ripples emerged. 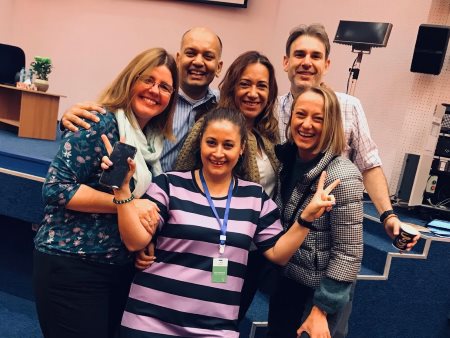 Her partner in crime was Lila -- a sparkly-eyed love warrior, who then took the Laddership course and is now hosting a circle with another dozen teachers.

The reason for the "earthquake" was a "Compassion in Education" weekend that Lila and Verita Foundation had put together in Bucharest last weekend. It reminded everyone of why education is much more than cognitive growth. That social-emotional learning (SEL) matters, mindfulness makes a difference, and that ultimately, we must rekindle the flame in our hearts. Hearing various ServiceSpace stories, doing a brainstorming workshop, listening to other speakers drove home the core point: we teach who we are. We must be the compassion we wish to see in the world, and it starts now.

On the first day, I opened with some reflections on the significance of cultivating compassion quotient -- what it is, why it's underutilized, and how we can amplify it. An inevitable feeling of goodness filled the air, as everyone collectively held such intentions together. That was followed by parallel deep-dive workshops, that allowed for inspired brainstorming on how to concretely bring this spirit to classrooms, but also underscored the need for inner compassion while remembering that we teach who we are. We closed out the day with an open dialogue on the many open questions that had stirred the pot -- "What is the difference between emotional quotient and compassion quotient?" "Why is compassion sometimes seen as a sign of weakness?" "Should compassion have boundaries?" 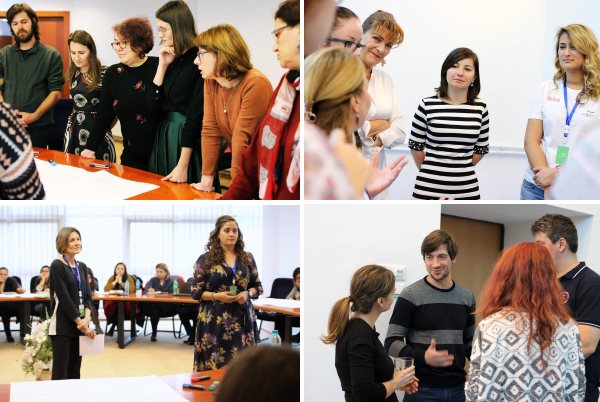 All of us felt uplifted. A businessman wondered how to bring this spirit into finance. A musician reflected on giving away his gifts. A startup entrepreneur wondered if we can use virtual-reality to grow in compassion. An English teacher echoed what many educators felt:

"The last couple of months have been super intense and packed with many changes and challenges but at some point, I have to admit I lost the joy and I let anxiety take over. I stopped having fun and being myself and started worrying about doing everything perfectly, about being perfect. I wasn't fully aware of this (I just told myself that I'm tired) until today when I saw you and all the wonderful people talking about compassion. I felt your presence and immediately realized how disconnected I was from joy and love and how much I needed to cultivate inner compassion again. I needed to get out of my head and into my heart and this happened today :) I am truly humbled and inspired and will forever be grateful!"

My favorite quote of the day was from Anamaria, in a workshop: "A heart is the coming together of two question marks. When curiosity meets curiosity, we arrive at love." 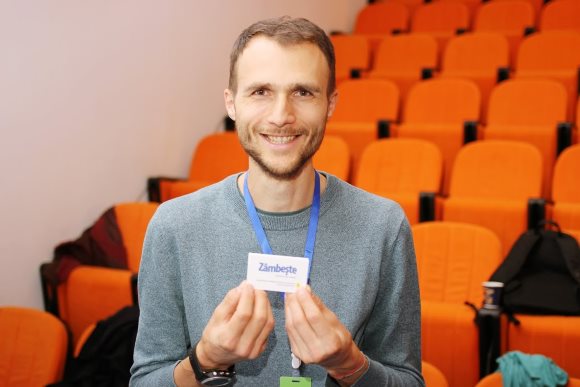 All the events accepted "unTickets", that allowed for admission with alternate forms of capital -- particularly acts of kindness. It was simultaneously translated to accommodate non-English speakers as well.

A gang of about dozen kids huddled up afterward for dialogue, and they openly shared about the isolation they feel. When I asked them about their relationship to technology, they said, "We wouldn't give up social media, because it does connect us. But it doesn't help us build deeper friendships." To build on that, we all agreed to do an extra act of kindness that night itself! 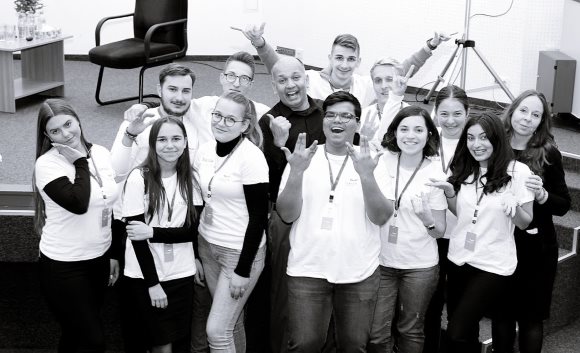 In fact, my first moments in Romania were filled with an act of kindness. Doina and Lila had made hearts with a message that said, "Have a lovely day, because you're lovely." We gave them to random strangers at the airport. :)

Verita school started five years ago, when a kindergarten teacher named Gabriela met an entrepreneur named Richard and convinced him to start an IB school that leads with heart. "When you see him put on his clown gear and make cancer kids laugh, you can see who he is," Gabriela says. Very rapidly, it became one of the most sought-after schools in town. Already at 330 kids, from K-12, there is now a waitlist to join. "Schools are either cognitively focused, or have an add-on curriculum like SEL on the plate. At Verita, we want the whole plate to be rooted in values, and hopefully illustrate how that is a far more effective way to not only for intellectual development but for graduating resilient, caring and ethical members of society."

The second day featured three more talks, with a deeper dive into compassion. One from me, another from Teach for Romania, and third by a remarkable fellow who started a cancer home and is now running for Mayor. One of the most touching moments for me was the interaction over the applause. People clapped, and then it increased in its fervor. One person stood up. Then another. And another. It was almost as if everyone was remembering how mighty and innate our compassion was. I myself turned around to look at the screen, and started applauding our shared values. 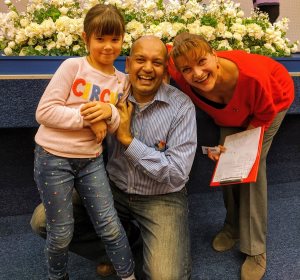 One older woman, who only spoke Romanian, started sobbing uncontrollably and showed a photo of a young, materially-poor 5-year-old girl that she gave water to. It turned out that the girl wasn't thirsty, but instead of throwing away the water, she lovingly watered a plant! A seven-year-old girl (photo on the right), who had come with her grandmother, shared her notes: "In a gentle way, we can shake the world. Thank you, Kindness."

Another parent came up with a sort of uneasiness, "My son was bullied by another kid in school, and it got so out of hand that we had to move my son to another school. It has been 5 years since. And I just met the parent of that other child here today!" After a pause, she continued: "It's difficult, but both of us decided to reconnect and build bridges."

To matter where one turned, even the translators!, a subtle-yet-significant ripple effect was in motion. Vlad, who started a beautiful Magic Camp and may likely become the mayor of Bucharest shortly, was also deeply moved.

Collectively, as Lila said, it felt like a jolt of a big earthquake. 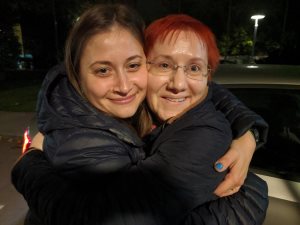 What a blessed few days in Romania. As Doina lovingly showed me around various village homes, I noticed a familiarity with the Indian culture. Despite its complex history with communism and present-day challenges of corruption, it is a country rooted in a generous multiplicity of views. As a part of the culture, everyone's middle name is that of a saint. It is embracing of all faiths. J. Krishnamurti said of the country: "The mouth of the Danube river will always be the home of universal spirituality."

On the roads of Bucharest, when people unexpectedly changed lanes in front of other cars, they turn on their hazards briefly to say thank-you to the car behind them.

My dear Romanian family -- my hazard lights are on. Through great serendipity, I merged into your lane and you took me in as family. A bow of gratitude.