My flight from Vienna had just landed. I changed clothes in a public restroom, and arrived at a café in downtown Warsaw for a public talk. Four volunteers were setting up coffee and herbal tea, partly nervous about how many will turn up, from the few hundred on Facebook who were “interested”. While I entertain thoughts of holding off jet-lag, a volunteer translator quizzes me about keywords that I’m going to repeat.

At one point that evening, I look at the crowd of mostly-non-English speakers and feel this moment of genuine awe. “How in the world did this happen? How did I get here, talking compassion with my brothers and sisters in Poland?”

Maybe that awe was building up. Over the previous twenty days, I had zig-zagged through a couple of continents, numerous cities, more than a dozen circles, and thousands of people. No agenda, no staff, hardly any financial currency used. No push. Yet so many hearts gravitating towards service, all strung together by an inexplicable order. For ServiceSpace, this is a familiar process all around the world. Yet, it still doesn’t strip the reverence for emergence. 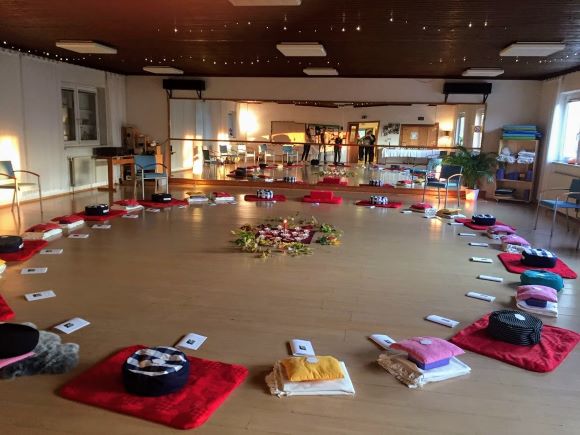 How is this happening? That HOW is actually the most significant part of this story. Without understanding that process, the stories can just look like a magical highlight reel; or worse, you can doubt it, as if there’s something hidden behind the scenes.

In practice, it’s just a simple application of an ancient principle: untiring effort with a surrender to emergence.

A cursory eye would imagine that such trips start with pushing out a request, orienting some local people, booking a flight and orchestrating multiple events. Alas, that is a recipe for an exhausting chore – far from awe and gratitude. :)

The ServiceSpace process plays out rather differently.

To illustrate, I’ll tell you a story from this trip. In the cascading ripples of nested stories, it's quite hard to know the boundary of where a story actually starts and stops. But we have to start somewhere, so I’ll arbitrarily take us to a few years ago in London. Here's a video of some visuals from that day:

That sunny day in London, Shamash attended along with his friend Vicky. Trishna was hosting, Satish Kumar and I were anchoring. Later, both Shamash and Vicky would say, "We walked down the stairs from Trishna's apartment and just knew that life was never going to be the same again. And it certainly hasn't been." After a "Museum of Happiness" event in London that attracted 5 thousand people, they were keen to step it up. Now, ServiceSpace organizing principles could be found on their website. To deepen, Shamash joined the Laddership Circle with Audrey, where it wasn't uncommon to run into powerful stories of his transformation.

At some point, Shamash emailed me, "When's the next time you're coming to London?" He organized the first Happier World conference around it.

Typically, speakers deliver content, shake some hands and depart. But twenty years of ServiceSpace teaches you to assume value in each moment. It’s a lot more work, but that’s the way of emergence. 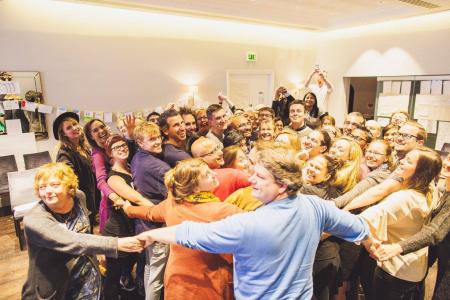 On the way into the Happier World conference, I met a young woman who asked me if she could support her new project. She ended up making a film, a version of which would later go viral in Vietnam. Similarly, at the end of the day, on my way out, I ran into a well-built Austrian fellow with a shaved head -- Katzi. I learned about Katzi’s remarkable work that really defies description. We got into one of these eyes-locked conversations that felt too sacred to end abruptly. That made me 45 minutes late for an important dinner with a state minister -- but it turned out there was crazy traffic in a particular part of London, and my dinner guest ended up being 47 minutes late! :) Before leaving, I uncharacteristically asked Katzi, "You should come to India for one of our upcoming retreats."

A few months later, Katzi could be seen sporting a ‘kurta’ on his first day in India, at our Gandhi 3.0 retreat in 2016. Incidentally, there were also three others from Austria -- Hermann, Alma, and Christine. 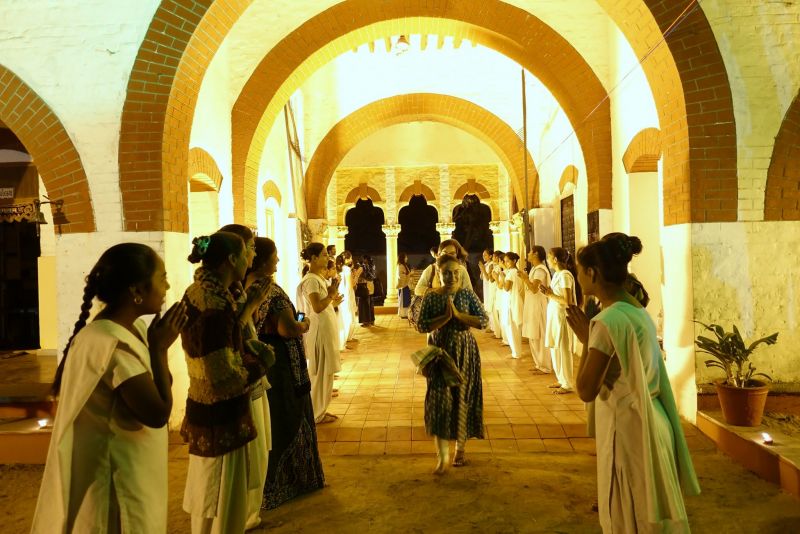 Fast forward another few months, and I found myself in Austria for a 24 hour visit. Christine hosted her first Awakin Circle. Another couple months later, Hermann and Katzi came to Auroville for Startup Service -- and ended up volunteering at the first Karma Kitchen in Auroville. Fast forward a bit more, an attendee of the first Awakin Circle in Vienna launches her own circle in Eisenstadt, a rural district of Austria. On my next trip, we all hosted the first Karma Kitchen in Vienna at Markhoff. Among other events, I gave a public talk at a university. Alma soon started a third Awakin Circle at the Markhoff, attracting a lot of young people. We held a 1-day retreat at Kathrin’s restaurant in Eisenstadt. 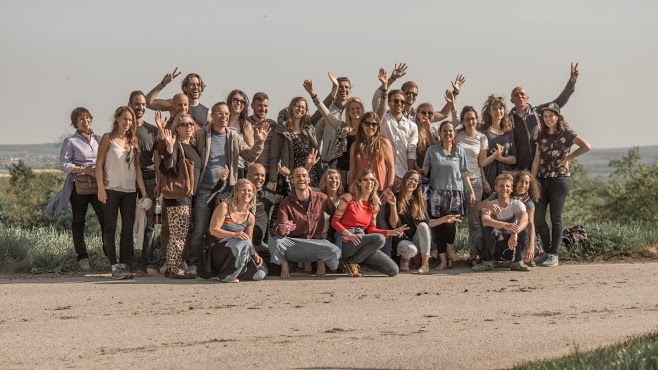 All those one-liners collectively ignite thousands of sparks. Maybe even flames. By the very propensity of compassion, it spreads and multiplies.

The question has never been if all this will scale, but rather if one can stay dialed in, assume value everywhere, remain in an always-on service. Untiring mind. You never know what leads to what, and you will never know. Trust. Surrender the outcomes.

To get from Vienna to Eisenstadt, Julia was giving me a ride. Along the way, retelling an inspiring moment from her journey, she was in tears. We bonded. She blogged an interview (English), which led to an invite to speak at a business conference, which brought me to Austria yet again last month.

Few years ago, I would’ve never imagined I would ever visit Austria – and now, this third trip in a year. 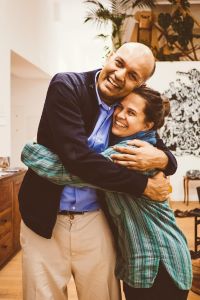 That business conference aside, Christine and Alma’s hosted Awakin Circles, and Kathrin and Ollie hosted a Karma Kitchen -- at their restaurant in Eisenstadt, with both their parents in attendance! During meal times, I met with media savants in Georg and Christina who have invited us on the jury of “World’s 100 Most Inspiring People”, popular European author Christian Felber who is exploring a “common good” retreat at Banyan Grove, Europe's Mind and Life founder, Cornelius, who invited me to speak at an event with Dalai Lama.

The sparks can’t be contained. A young politician, Stephanie Cox, who first attended an Awakin Circle because her husband booked her a cab without telling her the destination, :) is now initiating mindfulness circles in parliament. Thomas Franz, who sang at Karma Kitchen (as we tagged Hermann and Katzi with a car!), is now inviting his audiences to do acts of kindness. Helmut and Karin, who hosted the business conference, are keen to deepen value-based conversations in corporations. Manuel, who was very moved by an interview on activism, is working on a Netflix series where he wants to feature ServiceSpace. Nimo now has invitations to sing, Hermann has joined Trishna and Swara’s community pod calls with other global community anchors, a pan-Europe retreat of SSp coordinators is in the works.

Carpool with Julia led to a business conference in Austria, which led to all these unexpected ripples. Go figure.

And that conference is what got me to Poland this time.

Last October, with Rev. Heng Sure and Audrey-Sheetal-Khush, the soil was tilled in Poland. This time, the pumped-up crew of Iwona, Piotr, Maja and Natalia hosted a non-stop weekend with a public talk, a 9-hour “Awakin Festival”, followed by the first Karma Kitchen in Warsaw. The monastery that hosted the festival wants to keep the festival going every quarter; the restaurant owner, who hosted KK as a self-described skeptic, is ready to host “anytime” now; the most recent Awakin Circle in Warsaw attracted a whole bunch of new people. Jasky, who flew in just to volunteer, is now exploring a Karma Kitchen in Paris. You can imagine all that is bound to unfold there. 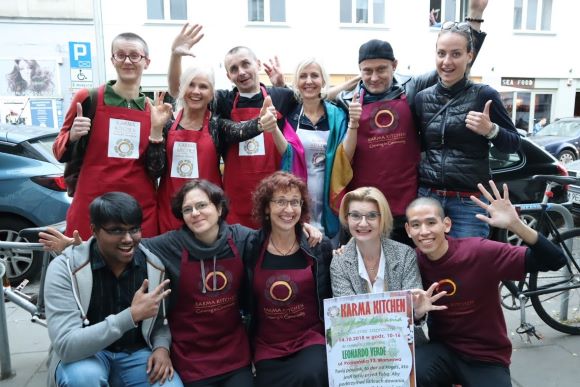 Prior to Europe was India – and I won't even begin to describe what happened in my 7 city, 10-day travels. :)

Twenty days of this. Really, twenty years of ServiceSpace. And one can imagine why I’m sitting at a café in a Warsaw with a moment of awe. Of reverence. Still, those ripples aren’t all that significant. That is only a symptom.

What catalyzed these ripples is the process. Not having agenda means you have to constantly assume value everywhere; for every person you meet in the elevator that creates a film, there will be 99 others that won’t. Not relying on your own money means you have to wait until conditions ripen and offerings are made organically; you don’t get to align invitations with your timeline and wish-list, but vice-versa. Trust in the divine clock, as they say. Not having staff means that you have to constantly serve until you build deep ties; if you don’t put others interests before yours, your affinities will run dry. 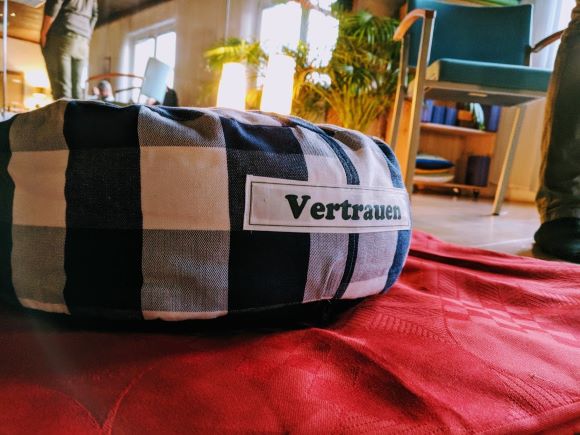 With beaming gratitude, local people everywhere hear the echo of these ideals and serve so enthusiastically. In Mumbai, for instance, when they had 100 RSVP's for an Awakin Circle, four mothers came together to cook for everyone, because somewhere along the way, their kids were not only transformed by ServiceSpace but they felt it in their relationships to them. In Austria, Christine’s neighbor hand-made the cushions we sat on; another non-meditating neighbor hand-picked her a bunch of tomatoes. All this emergence is miles away from a lets-get-this-done project -- rather, it’s a process with intricately interwoven roots. Beyond people merely coming together, it feels like an organic magnetization of a deep community heading towards noble friendship. A synergy of spirit perhaps.

Hence, the process: serve with an untiring mind, trust the timing of emergence, and take refuge in your affinities.

Simple and ancient. And filled with great joy. 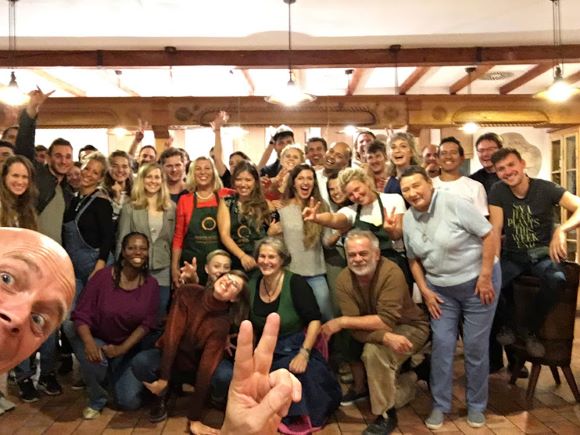 Last time I was in Vienna, someone gifted me an envelope with three hundred Euro notes. I paid it forward to another local giver. Except that he never used it, and discreetly stuffed it into my pocket on this trip: "You might need some of this here," he whispered in my ear.

Prior to speaking at the business summit, I had to walk past a homeless woman a couple of times during the day. By her clothing, she appeared to Muslim; by her demeanor, she appeared to be a mother caught up in an unfortunate circumstance. All day, she just sat there hoping for a few coins. Every time we would cross paths, I would put my hand on my heart to share a silent blessing, and she would do the same. We didn't have any language in common, but her radiant eyes always connected with mine.

The last time I passed by her, I wondered if I had some Euros in my wallet. I didn't. But then, I stumbled into that envelope in my pocket -- with three hundred Euro notes from the last trip. So I took one of them, walked back to her, and slipped it into her lap. She looked at it, and again re-examined it, as I went on my way. I looked back one last time, and her gaze was still directed at me, with compassionate tears in her eyes and blessings in her vibration. I thought of my own mother, and couldn't help but tear up myself.

With a bow of gratitude, in reverence to emergence, the beat goes on.